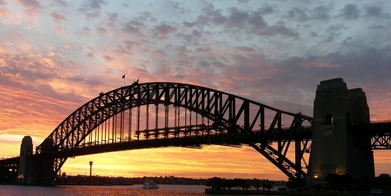 Compared to the third quarter, growth was up 0.6%, beating market expectations of 0.4%.

The strong data comes despite the global commodity slump hitting the country’s vital mining and oil sectors.Australia’s benchmark ASX/200 was up 1.5% on the positive news.

‘Given Australia is going through the biggest mining pullback in our lifetimes, this is a pretty good outcome,’ said David de Garis, a senior economist at National Australia Bank.

Analysts also said the stronger-than-expected figure meant further cuts in interest rates were unlikely in the near future.

The Australian central bank has held rates steady since May last year and earlier this week decided to keep its main interest rate at 2% for a tenth consecutive month saying it saw ‘reasonable prospects’ for growth.

However The Reserve Bank governor Glenn Stevens said the bank would be keeping an eye on the country’s low inflation rate.

‘Continued low inflation would provide scope for easier policy, should that be appropriate to lend support to demand,’ he said.